“Don’t forget that the flavors of wine and cheese depend upon the types of infecting microorganisms.” – Martin H. Fischer

In wastewater treatment, the treatment process that follows primary treatment. It is used to remove the remaining organic solids that have not been removed in primary treatment together with the 90% or more of the dissolved organics. Aerobic biological treatment is commonly used. Secondary treatment may also incorporate nitrification and biological phosphorus removal.

Secondary treatment, usually biological, tries to remove the remaining dissolved or colloidal organic matter. Generally, the biodegradation of the pollutants is allowed to take place in a location where plenty of air can be supplied to the microorganisms. This promotes formation of the less offensive, oxidized products. Engineers try to design the capacity of the treatment units so that enough of the impurities will be removed to prevent significant oxygen demand in the receiving water after discharge.

There are two major types of biological treatment processes:

In an attached growth process, the microorganisms grow on a surface, such as rock or plastic. Examples include open trickling filters, where the water is distributed over rocks and trickles down to underdrains, with air being supplied through vent pipes; enclosed biotowers, which are similar, but more likely to use shaped, plastic media instead of rocks; and so-called rotating biological contacters, or RBC’s, which consist of large, partially submerged discs which rotate continuously, so that the microorganisms growing on the disc’s surface are repeatedly being exposed alternately to the wastewater and to the air. The most common type of suspended growth process is the so-called activated sludge system. This type of system consists of two parts, an aeration tank and a settling tank, or clarifier. The aeration tank contains a “sludge” which is what could be best described as a “mixed microbial culture”, containing mostly bacteria, as well as protozoa, fungi, algae, etc. This sludge is constantly mixed and aerated either by compressed air bubblers located along the bottom, or by mechanical aerators on the surface. The wastewater to be treated enters the tank and mixes with the culture, which uses the organic compounds for growth– producing more microorganisms– and for respiration, which results mostly in the formation of carbon dioxide and water. The process can also be set up to provide biological removal of the nutrients nitrogen and phosphorus. Refer to Figure 1 for a simplified process flow sheet. 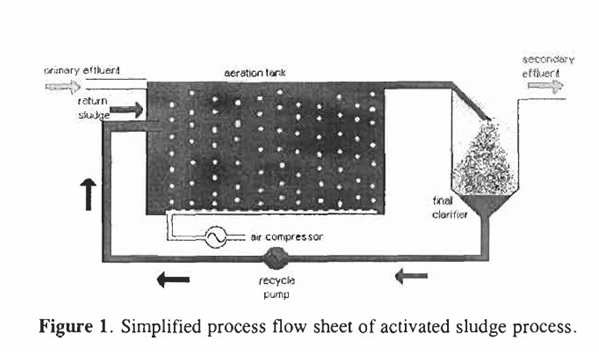 Some people are rather skeptical when it comes to biological treatment. Here’s why:

This site uses Akismet to reduce spam. Learn how your comment data is processed.